Have you heard of UPAP? Invest in UPAP and get $100 Dividend monthly 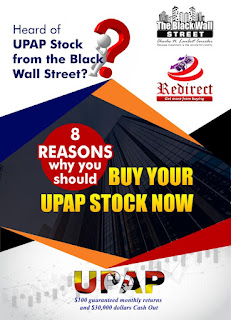 What exactly is UPAP? UPAP represents shares in the Back Wall Street’s full business operations, with each share carrying a monthly dividend of $10 and a cash out value of $30,000. UPAP is funded through the accumulation of 20,000 Investment Points earned through purchases at Redirect Mall (quickest option is purchase of 2 Computer Tablets). The Black Wall Street issued 20,000 UPAP shares in November 2017 and none of the following eight reasons were accessible at the time of the issuance of these shares. The courts overturned the government’s opposition to UPAP’s operations, although with caution for the government agencies. Today, learn about how far Black Wall Street and the UPAP have progressed.
1.BWS App – There is now a BWS App with cutting-edge functions such as shopping, investing, jobs, television, and social media, as well as 11 professional economic programs open for participation by over 50 million Africans for a weekly subscription fee of $2 ($100M per week expected over the next 6-9 months).

2. Fintech — a financial systems technology has been integrated with the BWS App, allowing payments to be transferred automatically from the user’s mobile money, PayPal, or bank account into the system, as well as dividends and salaries to be paid out automatically through the user’s phone to their mobile money, PayPal, or bank account. You can manage everything entirely on your own, from payments to points and investment, via your phone, wherever you are.
3. Economic Circle – The Black Wall Street has developed an unprecedented social media platform called Economic Circle. Its functions include the formation of economic groups, project management, and mass sensitization and engagement in the development of Africa’s economy. Local business advertising on this EC is only $20 per week, and over 3 million firms will be enrolled in the next 12 months, generating weekly revenues in excess of $60 million.
4. Platform Pro — a memorandum of understanding (MOU) called the India-Africa Technology Pact was signed, which will bring in 11,000 Indian IT instructors to teach Africans how to use the BWS App to improve their economic fortunes. Over 80 of India’s top news websites have covered the MOU, and three of the leading Indian job sites have launched a recruitment campaign.

5. Job Portal and Certificates to Earn: Black Wall Street has implemented a revolution and mutiny that has resulted in total control of Africa’s labor force through the Job Portal on the BWS App, which has millions of jobs available at any point in time for anyone across Africa, the new Certificates to Earn, which provides practical business training for all economic endeavors in Africa, and the Labour Capacity Review, which introduces new job placement metrics. This alone represents a $5 billion annual creativity that is now open for market dominance.
6. Cost of a single slot increases to $1,500: Africa has been rife with Ponzi Schemes for decades, which is why the BWS has been so adamant about teaching how investment works through practical business implementation. This is essentially why we are the only investment that boasts about not paying anyone until all UPAP-issued slots have been exhausted, YET we continue to expand.
However, with the use of Fintech technology, we will begin permitting automatic dividend withdrawals as soon as the remaining UPAP slots reach 500. When over 5,000 organic investors begin to testify about dividend withdrawals, UPAP will cost $1,500 until the last 500 investors exhaust their dividends. Following that, lifetime original stock UPAP will be available for sale if any individual wishes to sell one or more of theirs. An open bidding system has been integrated into the BWS App, with bidding starting at $3,000 per slot of organic UPAP. (UPAP’s market value increased from $150 to $750 within a few years).
7. Resumption of Computer Tablet Production: There was a lengthy hiatus in the production of computer tablets as we prioritized investments in dividend-generating technology, such as the BWS App and its functions. The majority of these have been completed, allowing for the restarted production of computer tablets, which customers paying may anticipate to get without delay.
8. King Charles has appropriated the economic legacy of African Americans: We now own the black economic legacy. When you Google Black Wall Street, the first result is Charles N Lambert (our founder and King of the BWS Community), our websites, Our Address, and our message of BWS Resurrection. Black Wall Street is a story that millions of African Americans have attempted to continue for over a century, but the name of Charles N Lambert changes everything. What an excellent moment to invest in UPAP shares!
Finally, there is a Payment Plan System that you can control entirely from your phone. It is now merely $100 to reserve and remove a UPAP space from the system. Utilize this payment plan immediately.

Ha-video.xyz Review: Is it Legit or a Scam?

SocialRebel.co Review (Is it Legit or Scam?)